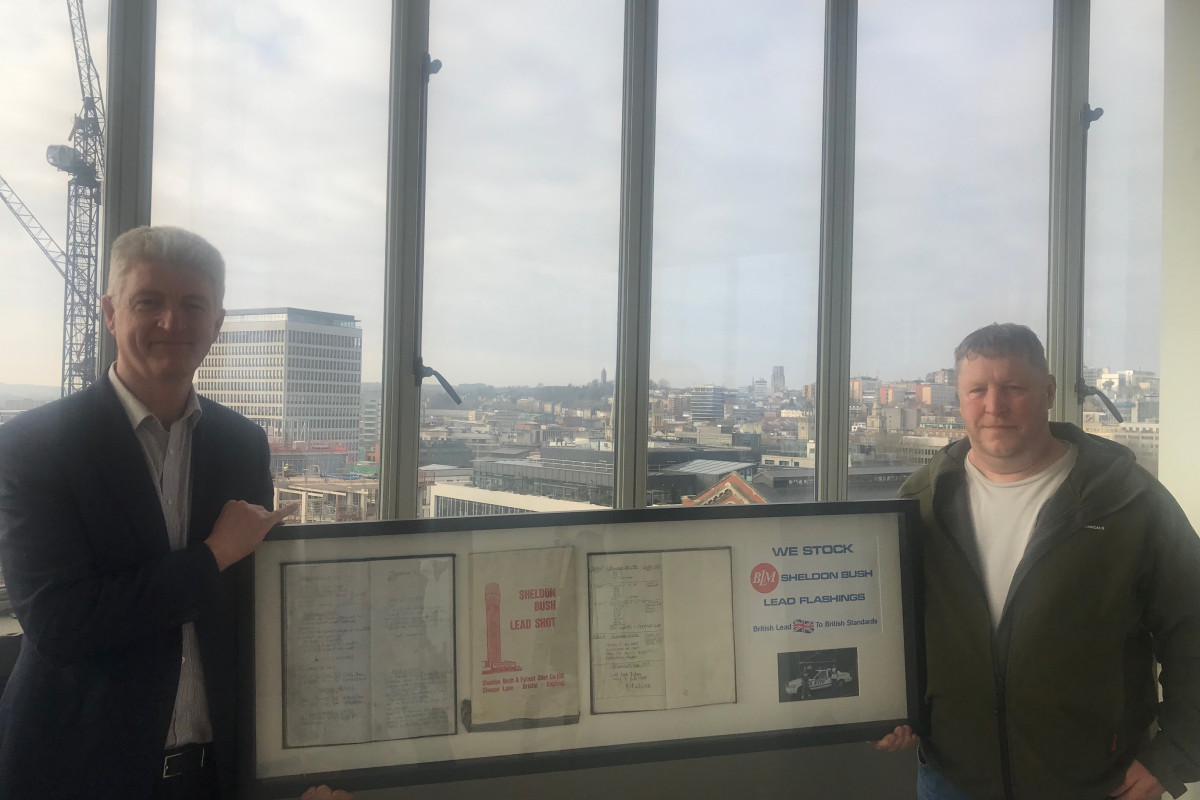 Bristol-man Simon Whiteway, 55, has donated a cherished collection of mementos belonging to his late friend David ‘Yan’ Saunders to be put on display at the iconic Cheese Lane lead shot tower in the Redcliffe area of the city.

Mr Whiteway, who was an operative at the Sheldon Bush lead shot tower in the 1990s, returned for the first time in nearly three decades to present John Rogers, CEO of The Workforce Development Trust (current owner-occupiers of the building), with a framed collection of items in memory of his friend and colleague.

Childhood friends Simon and Yan worked side by side on the Sheldon Bush production line for five years before the lead shot tower was decommissioned in 1995 – at which point it was said to have produced lead flashings for nearly all of the buildings in Bristol.

Order books dating back thirty years, Sheldon Bush branded lead shot packaging and company signage, as well as a photo of Simon and Yan on holiday in New York in the noughties, form part of the quirky framed collection, which now takes pride of place at the grade II listed building’s entrance.

As Mr Whiteway climbed the tower, which was built in 1968, he discovered a familiar etching on one of the concrete sills. Recognising it instantly, the etching which reads ‘SIMON’ was kept for posterity by The Workforce Development Trust during recent renovation work.

Describing his return to the tower after so many years as a “surreal experience”, Mr Whiteway recounted fond memories of working there before paying tribute to his late friend.

“We had such a great time working here,” he said. “Yan and I were best buddies from childhood until he sadly passed away last year.”

Presenting the framed collection of memorabilia to Workforce Development Trust CEO John Rogers, Mr Whiteway added that “Yan would have been proud.”

“We are truly honoured that Simon has gone out of his way to gift us this collection of treasured mementos belonging to his late friend Yan.

“It is a fitting tribute both to their friendship and the industrial heritage of this landmark building, which we call home.

“The collection will take pride of place in our offices and will no doubt become a talking point for staff and visitors for many years to come.”

The Cheese Lane shot tower can trace its origins back to 1782 when William Watts patented a process for making lead shot – small pellets used for shotgun ammunition. Despite being a world first, William Watts was declared bankrupt in 1794. The tower survived various changes of ownership until it was taken over by the Sheldon Bush and Patent Shot Company Limited in 1868.

The site was moved to its current location on Cheese Lane 100 years later and today the building serves as the headquarters of The Workforce Development Trust – a registered charity – who purchased the building in 2020.

The planned multi-storey redevelopment of One Passage Street, which is adjacent to the grade II listed shot tower, is now open to public consultation. To view The Workforce Development Trust’s response to the current proposals, click here.